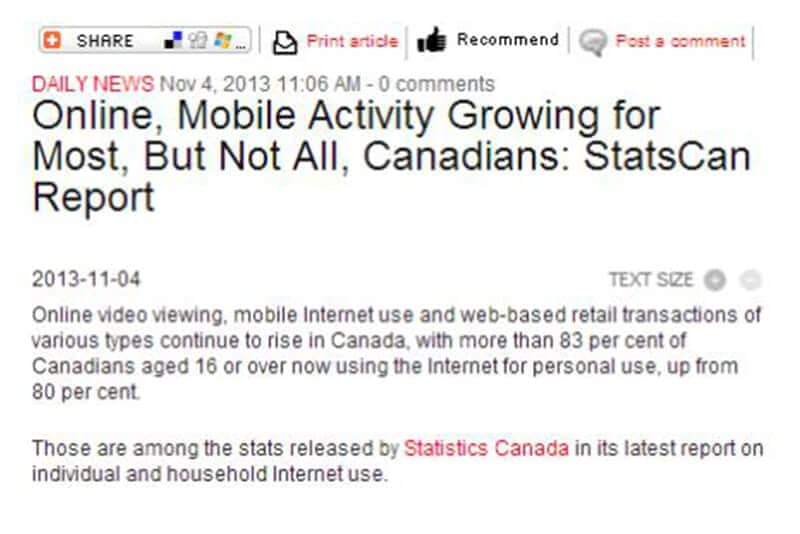 Canada has one of the largest concentrations of internet users per its population in the world. About 83 percent of all Canadians age16 and above are known to access the Internet almost every day. Statistics Canada has noticed a few trends that emerged among Internet users from a study they conducted last year. The Media Caster Magazine reported some of these results:

More than one-half of Internet users (58%) accessed the Internet in 2012 via a wireless portable device, such as a cell phone, smartphone or tablet, up from 33% in 2010. Canadians aged 16 to 24 were most likely to use a mobile device to connect to the Internet (84%). This access rate declined according to the age of the respondent, and it was lowest (9%) for those 65 or older.

Statistics Canada also saw big growth in online shopping, with the value of Web purchases made by Canadians hitting $18.9 billion in 2012, up 24 per cent from 2010 when the survey was last conducted.

These facts should give businesspeople a hint that Canadians truly are devoting much of their time to the Internet nowadays. They don’t need to go to a store to buy something if they can just use an Internet-capable smartphone from the comfort of their home to do the same thing. It’s no longer enough for companies to appease and serve their clients through traditional means. It’s high time for them to get in touch with their clients online. They can start by working with agencies like CAYK® Marketing, a calgary marketing company that specializes in using social media, cellular devices, search engine optimization, and more to get the job done.

This type of marketing is an example of what experts refer to as “digital marketing” since it focuses not only on the Internet, but also on cellphones, networking, and video production (among others). In essence, this approach to marketing exhausts nearly every form of digital technology to attract customers and keep them hooked. This is a good thing because, as Statistics Canada has discovered, Canadians have vastly different internet habits. Not all of them visit social networking sites regularly, buy or sell goods online, and the like.

However, it is still much more reasonable to engage in Internet marketing in calgary than to use mass media. With a thriving Internet population in Canada, there’s always someone who will listen to a message sent online.

(Article Excerpt and Image fromOnline, Mobile Activity Growing for Most, But Not All, Canadians: StatsCan Report, Media Caster Magazine, November 4, 2013)