There’s a lot of talk about social media in the digital marketing world, and for good reason. It has revolutionized the way that people, organizations, businesses, and cultures connect with one another online. If your business hasn’t caught on in this department, here’s why it’s so critical.

Starting on the Right Foot

If there’s one thing to look towards in order to get an idea of how powerful the rise of inbound marketing has become, it’s social media. Outbound techniques simply aren’t what they used to be when applied on their own, and the community-based, two-way immediacy of social media marketing really brings this into focus. Truly appreciating social media as a technology means starting from the fundamental assumption that it is a modern standard for how companies interact with their audiences and experience growth today. From there, fulfilling its potential is simply a matter of exploring its myriad functions and possibilities.

A Window into Your Audience

One of the most challenging aspects of bringing in a consistent stream of new and loyal clients is figuring out who exactly your leads are. How can you anticipate their needs? What will they be looking for, and what is the best way to ensure that they’ll see and prefer you before all the others? Gaining insight into your audience is critical, and while it may not seem like a key function of social media, it certainly is. Thorough strategies such as social listening, you have access to a massive quantity of data via social media that you can analyze in order to better understand who to reach and how to reach them.

It always pays off to delve into the deeper functions and capabilities of a tool until you’ve reached a level of fluency that will leave your competitors in the dust. All of the best brands have taken command of Facebook to engage with their followers and leads in discussions that improve their reputation and draw traffic towards their site by sharing relevant and stimulating content. They’ve learned to implement Twitter to make intelligent use of hashtags and keep an eye on trending terms and topics. They’ve utilized Instagram and Pinterest as versatile palettes for the expression of their visual identities. You’ll only be on the right track if you follow suit!

If your business hasn’t fully harnessed the potential of social media, it’s a lot more within reach than you might think. All it takes is to team up with the right marketing agency. Get in touch with the CAYK team at (403) 456-0072 to find out how we can enhance your marketing efforts!

Over the past six months, the CAYK team has been busy putting together our newest service offering: Marketing Automation. A part of this process is ensuring that our advisors are trained in InBound methodology. 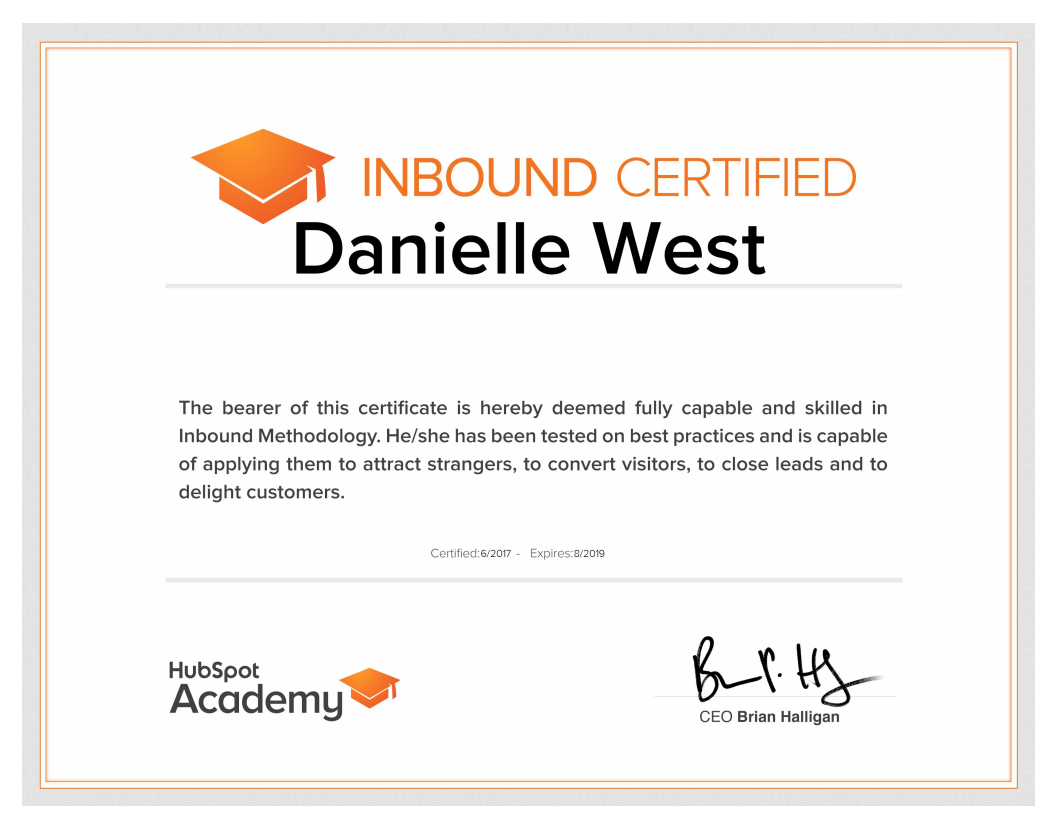 Congratulations to Danielle for achieving your InBound Certification.

We believe that Marketing Automation is more than just the software. Certainly, selecting the right platform is important, but it is the deployment of the program that counts. Marketing automation demands a strategy, a content development plan, and proper setup. A team profile will include a project manager, writers, videographers, photographers, and web developers.

The CAYK team is reaching out to our clients to inform you that OneLogin, the single sign-on provider (SSO) used by WordPress, has just recently suffered a security breach. CAYK does not use OneLogin, but we are concerned that you may.

Due to the possible impact on your website and data, we are ensuring that you are able to take immediate action. Information about the breach was revealed in the following announcement:

“On Wednesday, May 31, 2017, we detected that there was unauthorized access to OneLogin data in our US data region. All customers served by our US data center are affected; customer data was compromised, including the ability to decrypt encrypted data. We have since blocked this unauthorized access, reported the matter to law enforcement, and are working with an independent security firm to assess how the unauthorized access happened and to verify the extent of the impact. We want our customers to know that the trust they have placed in us is paramount, and we have therefore created a set of required actions.”

Due to how extensive and potentially damaging this breach is, we want to make sure that you are fully aware of this issue and of what can be done to protect yourself and your information.

OneLogin has recommended the following actions to protect your information:

Those who use OneLogin should have received an email linking to an article with the above information, including additional details. You can also see OneLogin’s blog post, as well as further articles about the breach at the BBC, The Register, Motherboard and Brian Krebs.

At CAYK, we want to help you minimise the risk to your compromised data and privacy. Please do take the necessary precautions outlined above.

It’s hard to think about social media without also thinking about hashtags. Their use has become practically universal across all the biggest platforms. However, they don’t function the same way on all networks and their use is more advisable on some than on others. Let’s find out why.

Twitter is certainly one of the primary platforms that has become known for hashtag use, but it’s not where they originated. The “pound” symbol was actually implemented in the ‘90s to signify the designation of different discussion groups for the online chat protocol IRC. Several years later, a former Google designer named Chris Messina suggested the use of the pound symbol for sorting discussion groups on Twitter. Not long after this idea caught on, it was fully implemented on Twitter and spread to other platforms, quickly becoming the popular tool for grouping and trending that we use today.

On many platforms, a good command of hashtag use will contribute to your success. That being said, it’s important to keep in mind that simply “using them” isn’t a comprehensive strategy for understanding their function. For one thing, excessive use of hashtags on any platform is guaranteed to get you in trouble. They can easily become disruptive to the flow of your content. As soon as a follower notices an excess in hashtags, they’re no longer thinking about your content. Instead, they probably see your efforts as a bit heavy-handed and insincere. Do research on the hashtags you plan to use in a post and only use the ones that are popular and functional enough.

Using hashtags on Twitter is a great idea, usually by applying a couple per tweet. They are also highly advantageous on Instagram, with 3 to 4 typically being a safe bet. Their use on Facebook, however, should be restrained, if not avoided altogether. Facebook has not refined its hashtag-related search result system enough to make for popular or functional use. In most places on Pinterest, they aren’t even made clickable, and when they are, search results for related boards aren’t guaranteed to actually connect well to the given hashtag. No matter what the platform, always remember that too many will significantly decrease your engagement!

How do you use hashtags in your marketing approach? This is just one small aspect of social media strategy that is essential to master when sharpening the brand and visibility of your business. CAYK can help you with this and more, so give us a call at (403) 456-0072 today!